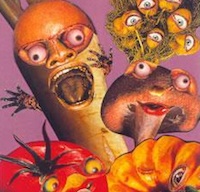 Monsanto’s new sweet corn produces Bt toxin, a genetically modified version of an insecticide from the soil bacterium Bacillus thuringiensis. Until now, Monsanto’s Bt corn and cotton crops have mostly been used in animal feed and highly processed ingredients. Even with this limited exposure, Bt toxin has already been found in the blood of pregnant women and fetuses. No one knows what will happen to people who eat Monsanto’s new Bt sweet corn, but Bt crops have proven deadly for grazing animals from livestock to monarch butterflies.

Monsanto’s new sweet corn is also “RoundUp Ready,” meaning it can tolerate unlimited amounts of Monsanto’s herbicide RoundUp. Roundup causes endocrine disruption, damage to DNA, reproductive and developmental toxicity, neurotoxicity, and cancer, as well as birth defects. Many of these effects are found at very low doses, comparable to levels of pesticide residues found in food and the environment. Monsanto’s new sweet corn will have a lot more RoundUp on it than non-genetically engineered varieties.

This is outrageous! We’ve got to fight back against unregulated, unlabeled genetically engineered foods!